Home » Hillforts and the Prehistoric Landscape – Our developing Understanding

Hillforts and the Prehistoric Landscape – Our developing Understanding

A talk given by Barry Cunliffe, Professor of European Archaeology at Oxford University on Saturday 7th March on the invitation of the Chilterns Conservation Board, the Buckinghamshire Archaeological Society and the Prehistoric Society.

The talk was introduced by Dr Wendy Morrison who leads the Beacons of the Past project which has delivered a high resolution LIDAR archaeological survey of the Chilterns Area of Outstanding Natural Beauty, illustrating the topography and archaeology of the Chiltern Hills. (visit the project portal here)

The Beacons of the Past project combines archaeology, landscape and conservation thereby creating the ideal future model for archaeology.

Not a lot is known about hillforts in the Chilterns as they have tended to be left out of current research. In general, hillforts are one element in the landscape that have been directly associated with history.

In 1818 the Reverend Skinner, an antiquarian began investigating the construction of hillforts. He was followed later in the nineteenth century by 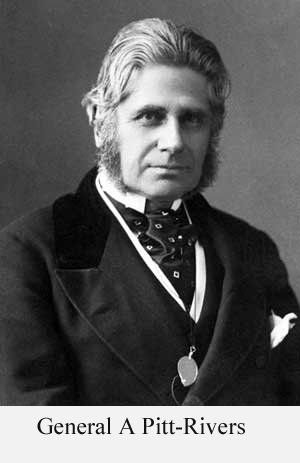 General Augustus Henry Lane-Fox Pitt Rivers who, following service in the British Army, became noted for developing archaeological methodology and the display of archaeology in museum collections. The General’s programme of archaeological activity in the Cranborne Chase in the 1880s are known for the high standard of excavation and recording. His researches concluded that hillforts in general were isolated creations by distinct tribes engaged in self-protection within a war-like society. This model of hillforts has presided for a very long time.

In more recent years the model has been subject to adaptation as while most hillforts look the same they don’t always do the same thing.

In between the wars, archaeologists Maud Cummings, working in Wiltshire and Christopher Hawkes working in Hampshire produced a great amount of useful evidence about hillforts. Also Robert Mortimer Wheeler conducted major excavations between 1934-7 at Maiden Castle in Dorset. He began to ask the vital questions about whether people lived there permanently or only in times of war. He postulated that rather than being just forts they should be seen as hill-towns.

After the Second World War there was little excavation of hillforts with the exception of South Cadbury in the Sixties by Leslie Alcock.

The excavations at Danebury led by Barry Cunliffe, then at 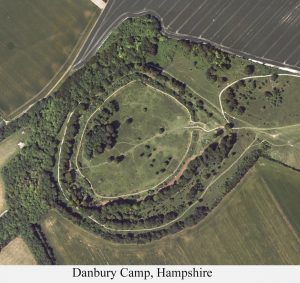 Southampton University, began in 1969 and continued through to 1988. This was largely the consequence of Hampshire County Council buying up hillforts and other sites to create a pattern of country parks.

Over time it became apparent that the site was occupied from 550BC to around 50BC. Excavations of the interior – about fifty percent was excavated – indicated a structured layout that continued throughout the occupation period. This suggested a stable society with a defined system of social control. Roundhouses were the principal domestic buildings but grain stores were rectangular buildings elevated above the ground to keep out vermin. There was also a square ritual site.

Danebury was heavily populated but is not a typical hillfort. Wallbury hillfort is totally different to Danebury as nothing has been found inside it at all. It is believed that Wallbury was used for a seasonal round-ups of livestock, perhaps prior to winter where animals were slaughtered, flocks and herds redistributed among the farmers and veterinary practices conducted. Indeed, at Danebury a discrete earthen embankment was noted along the outer north-eastern edge and believed to be a convenient feature against which to herd livestock into an enclosed space.

It is evident that hillforts began as simple enclosures created for such possible practical purposes but soon became elevated into social meeting places. These, in turn became trading hubs with related ritual functions leading up to the practise of lordship including judicial practise, followed by any possible sequence of human activity.

Not all hillforts developed into settlements and they need not have developed in the same way. Yet hillforts emerge as evenly spaced within the landscape with access to watersheds as the factor that divided one from the other.

Some hillforts that did develop acquired ceremonial grandeur, processional ways with liminal and practical gateways to control both access and the emotions of people either as individuals, groups or as visiting grandees. In such places control seems to be an important factor.

At Danebury there were signs that aggression had taken place. A grave-pit was discovered where human corpses had been deposited in a seemingly disrespectful fashion.

Hillforts need to be seen within their associated, historic landscape. Supporting farms within the territory of the fort were measured by their distance to water sources, usually a mile. These can be measured in the landscape by settlement patterns and planned landscapes can be traced from the arrangement of fields and tracks.

There is good reason to consider that Iron Age hillforts grew from out of late Bronze Age livestock ranches with field patterns associated with those boundaries.

There is no doubt that hillforts within the west of what is now England were strongly defended.

From around 100BC these hillforts had begun to evolve into `oppida’ or dispersed urban settlements much like Verulamium and Colchester became by the time of the Roman invasion in 43AD. Hillforts did persist, particularly in what is now Wales and Scotland.