HS2 Archaeology on the Line – Year 2

Jay Carver, Lead Archaeologist for Fusion, archaeological contractors for HS2, hosted and opened the online conference by expressing how new all participants were to webinar technology. He then introduced  Peter Marsden, Chair of Bucks Archaeological Society (BAS).

Introduction. Peter outlined how members of the society had researched the known archaeology along the line of HS2 from its announcement in 2010, assessing its impact and publishing their results. Note 1.
Getting this Bucks HS2 Archaeology conference into play had been a struggle, with postponement by the General Election, then the onset of coronavirus. It was thanks to Fusion that it was being broadcast on-line today.
Peter then handed back to Jay

Jay Carver – Progress in 2019, including Stoke Mandeville Old Church
Jay explained that the conference had been designed to cover discoveries at specific sites along the line of HS2 since the last Conference in September 2018, with some items being uncovered in the last few weeks and days. This period saw many interruptions to the archaeology – both physical (wet winter) and political, but progress had been made.

Fusion, working for the HS2 phase 1 project, has an extensive plan and strategy for its archaeological activity, to optimise the information gathered from the individual sites. Activities included extensive desk-based searches of previous excavations in the area, plus the use of aerial photography, Lidar, field-walking, metal detecting and geophysics. The project gave a unique opportunity to study the archaeology on a landscape scale, which required innovative methods and vast amounts of information. 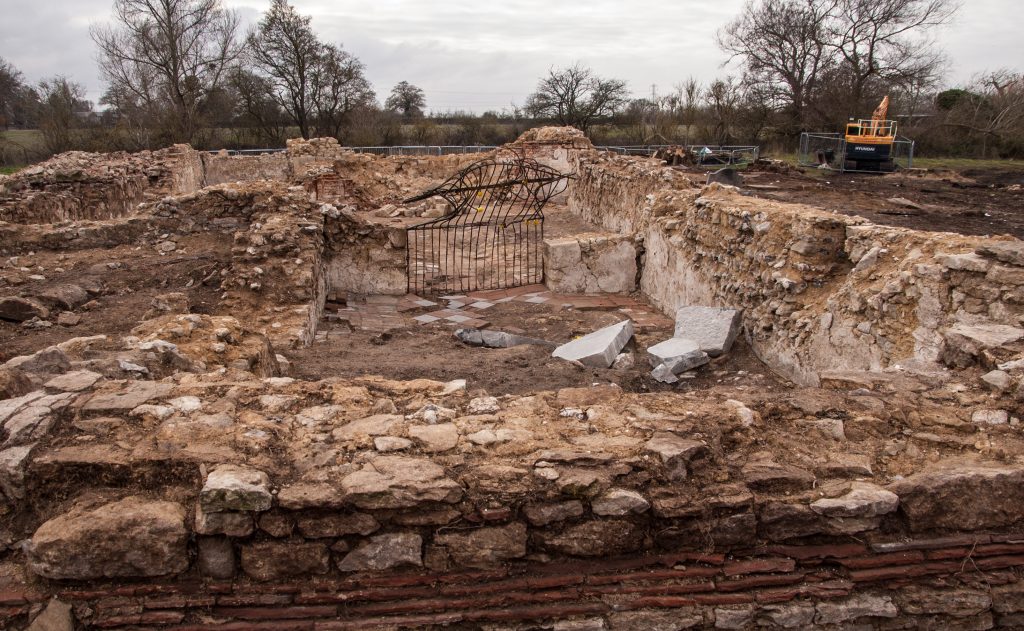 later in 2020, with preparations to tackle the anticipated 3000 burials and the rare opportunity to excavate through and beneath an 11th century church. Note 2.

It is hoped that further opportunities for public engagement at the site can be arranged.
Jay then handed over to Iain:

Iain Williamson – From hunter-gatherer to homesteader: archaeology in the Colne Valley
Iain managed the excavations in the very south of the county where the rail line will cross the Colne Valley on a viaduct. The valley is known as an important site for Mesolithic flints and the adopted investigation approach reflected that fact. The excavations were focused on two sites:

1. On the east side of the river the geophysics at Dews Farm showed some minor anomalies, but given the nature of previous finds this was not unexpected. The geophysics results and deposit modelling were used to guide trial trenching in both anomaly positions and in ‘blank’ positions. The trenching found two discrete sites; a scatter of flints across and in the natural geology south of the Newyears Green Bourne (stream), and two areas of burnt flint north of the stream.

South of the stream a large number of flints were recovered, with two distinct clusters plus a wide distribution of individual finds. They included worked tools (blades), debris and some flint cores, suggesting that the site was used to ‘work’ flint nodules into cores from which tools could be made.
North of the stream two areas of burnt flint may represent Neolithic or Bronze-age burnt mounds. These showed no signs of metal working but stake holes below one mound may suggest a sweat-lodge structure.  They may also have been for heating food. Laboratory dating of the burnt flints is on-going.

2. On the west side of the river, on a slight ridge (just before the south portal of the HS2 Chiltern Tunnel) the geophysics showed a number of potential field boundaries and small pits. Again trial trenching was designed to investigate the results and to prove the ‘blank’ areas.

The trenching confirmed the presence of several linear and curved boundary ditches which enclosed a small farmstead dating from the Iron-age through to the Roman period. The ‘farm’ had been remodelled and extended with some pottery finds in the ditches (which are in for laboratory dating). The Roman period is represented by a corn drier, rectangular house and a small post-built structure, possibly a barn. A high status, reused, roman tile and some flue bricks were found, indication of a possible Roman ‘villa’ near-by.
Iain handed back to Jay for Questions and Answers (Q&A), who then passed control to Rachel:

Rachel Wood – Persistent places: The discovery of a monumental landscape at Wendover’s Wellwick Farm
Rachel manages the excavation sites and subcontractors from the north Chilterns through Aylesbury vale. She chose to focus on the discoveries at Wellwick Farm, on the western edge of Wendover, where field work is still ongoing. The site lies to the north east of two small bronze-age mounds. The geophysics showed two areas of pit clusters plus some possible boundary ditches.

Trial trenching showed the ditches to be extensive, including a possible round house structure. The large ditch near the ‘round house’, and adjacent to an ancient track way, contained a human skeleton (possibly male) lying face down. Signs of reworking the boundary ditches were uncovered, and work continues on this.

Trial trenching in the area of pits to the south of the site showed an ‘organised’ set of post holes and a possible structure. Stripping exposed a very large (60m) circular wooden post structure, with a horseshoe-shaped set of postholes at the centre and a possible entrance in the south east – pointing towards the bronze-age barrow mounds and the winter solstice(?) 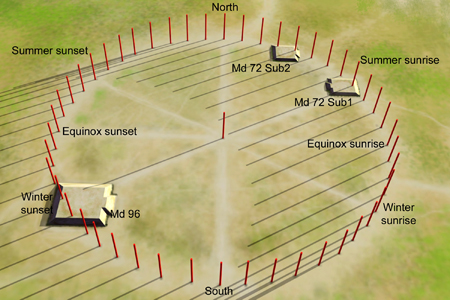 Initially dated to the bronze age, work continues on understanding and recording this significant post-hole circle.

The structure in this area is of a later date and may be a Roman Temple.   Work here is at an early stage and further excavation is required at the western pit cluster and at the northern edge of the site.
Rachel handed back to Jay for Q&A, which revealed that input from BAS members guided the Fusion team to the finds alongside a trackway at Aston Clinton, a little further to the east. Note 3.   Jay then passed control to Dan:

Dan Hounsell – Romans and Saxons in Buckinghamshire: Great Missenden longhouses and Chetwode settlements in the first millennium
Dan is currently managing the excavations at Chetwode in the north of the county. Previously he supervised the excavation at the Chilterns Tunnel North Portal – to the east of Great Missenden.

The geophysics at the North portal showed a scatter of possible ditches and pits. Trial trenching at the top of the hill (next to the portal) confirmed the geophysics. On the brow of the slope, where an access road is being constructed, what was initially interpreted as boundary ditches turned into chalk and flint quarry pits once trial trenching had exposed them. The site displays quarrying activity over a long period, possibly from the iron age through to medieval times.
Further down the hill a cluster of geophysics results produced a major surprise. Trenching and then stripping exposed the beam slot and post-hole foundations of a long house. A small number of finds date the structure to the Saxon period. There are three other post-built ‘houses or stores’ at the same level as the Saxon hall, plus a number of pits, with a small number of pottery finds. There are no current finds indicating activity between the Saxon period and the mid-medieval period.

The current village at Chetwode is a remnant of an earlier settlement of some size, demonstrated by the presence of a Priory church and Manor site. HS2 will pass to the west of the village. Geophysics along the line of the railway indicated several small ditch and pit clusters. Trail trenching here is still ongoing (through a very wet winter).
Initial work has uncovered the end of a sunken-floor building (Saxon) plus ditches, Roman pottery, medieval pottery and a possible kiln.. The sunken-floor building is unusual for this area of the country and does indicate that the excavation has exposed an early part of the settlement at Chetwode.
Dan handed back to Jay for Q&A, with several online questions about the dating and quarrying at the Great Missenden site. Jay then passed control to Nick:

Nick Finch – Romano-British archaeology in Northamptonshire and Warwickshire, including finds from the Battle of Edgcote 1469
Nick is supervising the excavations at several site across Northamptonshire and Warwickshire. In general these investigations are running behind the work in Buckinghamshire. Most are still at an early stage. Nick chose three sites to illustrate the activity and finds in this area:

1. The line of HS2 will cross the A422 road to the east of Brackley. To the north of the road crossing the geophysics showed field boundaries and pits. Trial trenching, which is still ongoing, has confirmed the ditches (and the blank sections) with finds dating the small ‘farm’ to the Romano-British period. Further work will try to establish land use and details of any occupation.

2. The second excavation area is beside the river Cherwell to the north of the site for the Battle of Edgcote. Geophysics shows two areas of potential occupation and the site potentially extends right down to the river, but here is covered by additional river deposits. Metal detecting has shown no evidence of the battle on this side of the river. Trial trenches have confirmed the geophysics with ditches enclosing two separate areas.

Work continues in order to understand how (or if) the two sites are connected and deposits in the ditches are being analysed to understand their organic content and the potential land use at the site. Finds included two burials, a man and a woman, with a finger ring and hair pins associated with the female burial.

3. The third site to the east of Greatworth is another unexpected settlement exposed by the geophysics. This time overlaid by extensive medieval ridge and furrow. The ongoing trenching here will try to confirm the geophysics as well as understanding the impact of medieval ploughing, and modern ploughing, on the underlying archaeology. Top-soil analysis will also try to establish if, and how widely, the archaeology has been disturbed and spread.

Landscape-wide analysis will look at the sites of these ‘unexpected’ settlements to understand where they are sited and what this might tell us about early farming practice and land use.
Nick handed back to Jay for the final Q&A.There were many words of thanks and congratulations from the audience via the on-line session chat. Jay thanked the presenters and the fortitude of the audience and then brought the conference to an end.