Around 180 people came to Amersham on Saturday 7 March to hear Professor Barry Cunliffe talk about the hillforts of the early Iron Age – of which the Chilterns has a good collection. 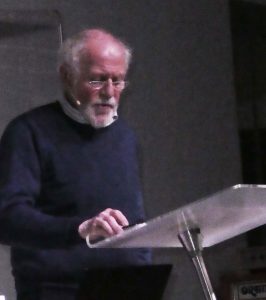 This was a joint meeting organised by BAS, the Prehistoric Society and the Chilterns Conservation Board, whose current ‘Beacons of the Past’ project includes a LiDAR survey of the whole of the Chilterns which is revealing previously unknown facts about our local hillforts and their prehistoric landscapes.

Over a year ago, the Prehistoric Society, an internationally recognised body, invited the BAS to organise one of their outreach events in the UK. We took up the challenge and, recognising the significance of the ‘Beacons of the Past’ project, invited Dr.Wendy Morrison the project’s leader, for her views. She suggested Professor Sir Barry Cunliffe as the speaker and we were delighted that he accepted the invitation. The project kindly agreed to meet the cost of hiring the King’s Church in Amersham.

It all came together on Saturday 7th March when between around 180 people attended to hear a splendid lecture on the latest thinking on the origins, function, and development of these fascinating monuments. Professor Cunliffe congratulated the CCB on its LiDAR survey, saying that further investigation of the Chiltern hillforts could add to our general understanding of the Iron Age society that built them. He also cheerfully answered many questions from the floor.

The event was accompanied by displays from the project, the County Archaeological Service and our own Active Archaeology Group. A busy bookstall gained good sales. Many BAS members were involved in making this event a success including our team of much-needed car park-attendants!

A review of the talk (by Nigel Wilson) can be found here.