As the Covid-19 epidemic continues into its second year, we cannot predict what level of social restrictions will be in force in Summer 2021. Two of the five outings planned in 2020 had to be cancelled, while each of the three others – on the village of Hedgerley, archaeology on the Grand Union Canal and medieval Brill –  were replaced by talks and presentations on-line. All drew large online audiences.

PLANS FOR AN UNPREDICTABLE SUMMER

In 2021 we will be planning for both ‘real’ and ‘virtual’ options: to run real face-to-face (though probably socially-distanced) outings if this is possible, but when it is not then to replace these with ‘virtual on-line tours’. Three outings are being planned in this way:

A guided history (virtual) walk around the north Bucks village of Little Horwood
on Saturday 12 June, led by Julian Hunt.
Little Horwood once belonged to the Abbot of St Albans, 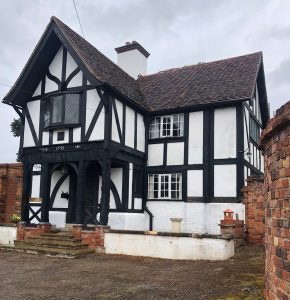 while that part of Whaddon Chase within the parish was called the Abbot’s Wood. At one time Little Horwood had a Vicarage and a Rectory, and can now boast two fine 20th century country houses. Julian will take us on a virtual walk around the village, commencing at the Shoulder of Mutton Inn which has recently been purchased by a village committee. Then to the nearby St Nicholas Church, where newly re-cast bells have this year been installed in a brand-new bell-frame.
0000
We will then visit the sites of Moat Farm and Little Horwood Manor, built by the financier, George Gee, just before the Second World War. Then to Horwood House, built in 1912 for Frederick Denny, whose wealth came from his sausage factory in Waterford. We will finish at The White House, a half-timbered Arts and Crafts-style residence built for the coaching enthusiast, Alfred Broadwood of Great Missenden.

A virtual guided walk around the archaeology of Great Linford Manor Park,

on the northern edge of Milton Keynes on Saturday 10 July at 14:30, Doug Stuckey on the Park land history and features, including St Andrews Church plus the society’s recent Active Archaeology Group dig to investigate the manor’s ruined ha-ha.

A guided tour of Aylesbury’s hill fort, historic buildings of the county museum and St Mary’s, its former minster church, 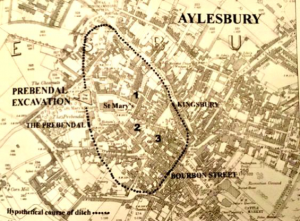 The decision whether these will be ‘real’ outings or ‘virtual online tours’ will be made closer to the date, when the epidemic and its restrictions are clearer. 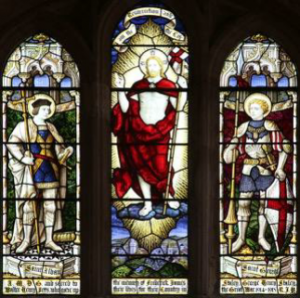 will not be run this year, because the closure of many churches makes planning impossible. Instead Michael Hardy, the Church Crawl organiser, will give an online talk and presentation on Stained Glass in Bucks Churches on Saturday 25 September.

You can see Michael Hardy’s, church glass pictures, many of which he used for his presentation, on his web site HERE