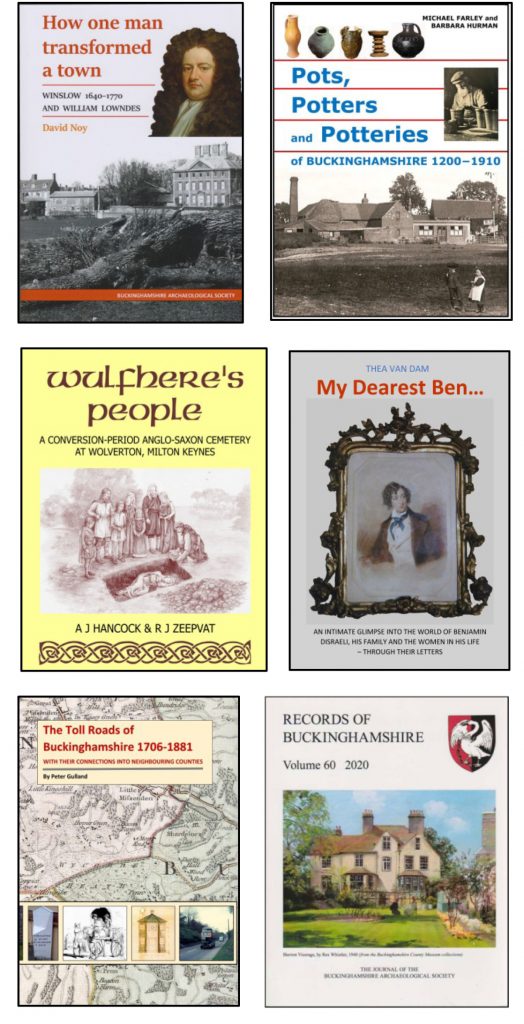 How one man transformed a town:
Winslow 1640–1770 and William Lowndes
– by David Noy
William Lowndes left Winslow at the age of 15 when his father went bankrupt. He returned to pay his father’s debts,
build Winslow Hall and change the town forever. David Noy has mined the documentary record to tell this extraordinary story. Published November 2020.
£11 plus £3.50 post and packing.

Pots, Potters and Potteries of Buckinghamshire 1200-1910
– by Michael Farley and Barbara Hurman
Pottery was a major Buckinghamshire industry with dozens of kiln sites. This comprehensive gazetteer lists pottery production sites and every potter in the documentary record by name – and  illustrates their products where known. All alphabetically by parish for easy access.  Published October 2019.
£15 plus £1.50 post and packing.

Records of Buckinghamshire 60
This year’s journal includes everything from a Late Bronze Age settlement at Denham to the 1817 Newport Pagnell Canal, from Martha Janes, who was an earl’s mistress, to the results of LiDAR scanning at Tylers Green in the Chilterns.   Published May 2020.
£15 plus £3.50 postage and packing.

Wulfhere’s People:  Excavations at Wolverton – by A Hancock and R Zeepvat
Wolverton’s Anglo-Saxon cemetery was the largest yet discovered in Buckinghamshire: 83 people, village people who worked the land: their most common ailment was osteoarthritis from hard physical labour. They lived in ‘Wulfheres Tun’, from which comes the modern name of Wolverton.  Published November 2018.
£18 plus £2 post and packing.

My Dearest Ben: Disraeli through his letters – By Thea van Dam
An intimate glimpse into the world of Benjamin Disraeli, his family and the women in his life – through their letters.  Published February 2018.
£4.50 plus £1.50 postage

The Toll Roads of Buckinghamshire 1706-1881 – by Peter Gulland
The toll roads of the 18th and 19th centuries created the main road network that we still use today. This book tells who built them and how – and, in detail, what you can still see of them today.  Published September 2017.
£12 plus £3.50 post and packing.